You are here: Home / Taste The World / What Does Tarragon Taste Like and How to Make Tarragon Recipes?

If you are a gourmet of French cuisine, surely you cannot help knowing four finest herbs in traditional French cooking including chives, chervil, parsley, and tarragon. Of all these seasoning ingredients, tarragon is seldom mentioned, but if you have enjoyed dishes with it, you will never forget its pleasant taste.

Tarragon can make the distinct flavor and pleasing aroma for your recipes. However, like other herbs, you cannot add it arbitrarily to any dishes you cook because it depends on how the combination of different flavors works.

So, a question appears in your mind “What does tarragon taste like so that it can go well with your dishes?” In this article, let me help you find out the satisfying answer to this question. Not just that, I hope you will learn more about types of tarragon, how to use it properly as well as how to make recipes with it.

​Tarragon, also called estragon or dragon herb, is believed to be a native of Mongolia and Siberia and started being cultivated over 600 years ago. In addition, it is also thought that tarragon was brought to Italy in the 10th century when Mongols invaded there.

​Tarragon has been used popularly in England since the 16th century. Until the beginning of the 19th century, it appeared in the United States. Nowadays, this aromatic herb is grown popularly in North America, South Europe and some parts of Asia such as India, China, Mongolia and Siberia.

Besides, some tarragon plants produce infertile seeds while others produce feasible seeds.

​How Many Types Of Tarragon Are There?

​There are three types of tarragon including French, Russian and Mexican variety. In spite of the same family of herbs, there are significant differences in their appearances as well as tastes.

However, before finding the answer to the question: “What does tarragon taste like?” to distinguish them, let’s explore the appearance of each tarragon type right now.

​French tarragon plants are commonly grown in the temperate region and used for culinary purposes. They can only grow up to 24 inches in height with narrow 2-inch-long leaves. The leaves usually have fresh greener color than other varieties.

French tarragon has tiny, pale green and sterile flowers, so it is not cultivated from seed but root division. 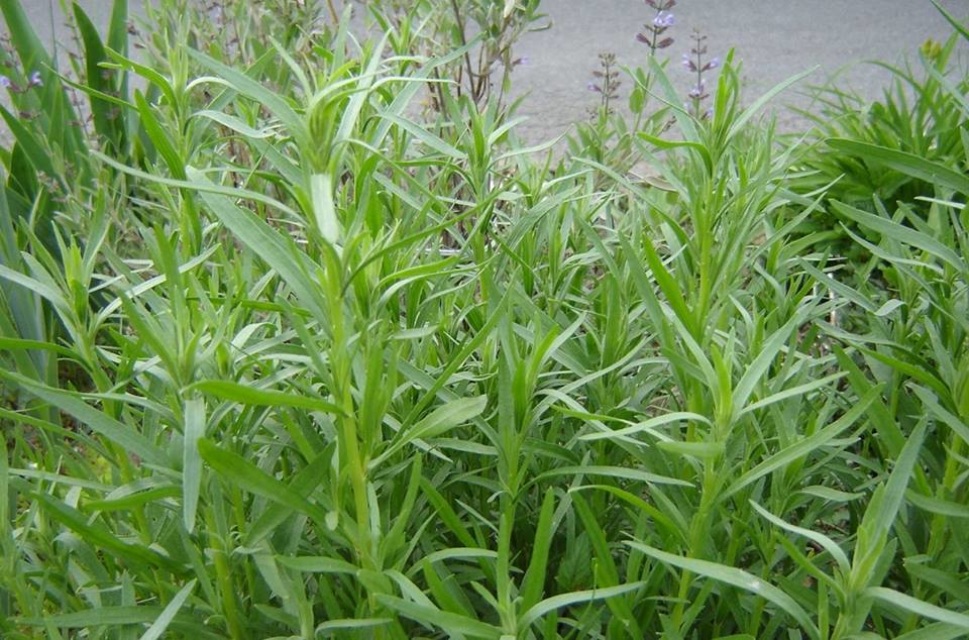 ​Russian tarragon is quite similar to the French one, but it also has some differences. It is very hardy and vigorous with up-to-35-inch height. Thus, Russian tarragon plants can propagate in arid regions, and the gardener also does not take much care of them.

Besides, unlike French tarragon, the leaves of Russian variety are narrower, longer and coarser.

​Mexican tarragon, known as Mexican mint marigold, can grow up to 35 inches high. It is a variety which can be grown as an annual in temperate regions and as a perennial in hot climates. It has shiny medium green and 3-inch-long leaves and golden yellow flower heads. Unlike other varieties, the flowers of Mexican tarragon fit to be eaten.

​For the centuries, tarragon taste has been praised highly by many people in different cultures. So, what does tarragon taste like? Why is its taste so unforgettable? The following is the answer for you. Tarragon taste is a unique mix of bitterness and sweetness.

In particular, it includes hints of vanilla and licorice so it can make those who try it feel the combination of warmth and coolness on their palate. For some people, tarragon also has minty taste combined with a little flavor of hay.

However, some others say that it is peppery-flavored with a bit taste of turpentine. Sometimes, it is also associated with eucalyptus flavor, so it makes the difference between it and anise or fennel. Regarding its scent, tarragon has a distinctive aroma of licorice and anise or mixed with the smell of mint and celery.

Tarragon varieties also have different taste and aroma, especially between French tarragon and Russian one. French variety has a tingly flavor of citrus or licorice, so it tastes slightly sweet, while Russian tarragon is bitter and harsher.

Many gardeners say that it is less aromatic and flavorful than the French one. Moreover, it is easy to lose its taste when it matures; therefore, it is not used in cooking as much as French cousin. Mexican tarragon, on the other hand, easily differentiates it from other varieties.

It can be said that its taste is brought in to mediate between French and Russian one. Honestly, with a hint of anise, the taste of Mexican tarragon is similar to French one and stronger than Russian one that does not decrease considerably with age. Thus, it is added to dishes as a French tarragon’s stand-in.

​How To Use Tarragon In The Right Way?

​To use tarragon the best and the most effective, you should pay attention to how much tarragon and when you add it to your dish. As mentioned above, no matter which variety, tarragon has a strong taste and scent. With a large amount of tarragon, you can destroy the flavor of your dishes.

For this reason, you should use it in small quantities to make your recipes more charming with the mild taste of tarragon. In addition, the heat resistance of tarragon is weak, so its taste is easy to lose in the process of cooking.

Therefore, you should add it at the end of the cooking phase to keep its attractive flavor and aroma.

​Fresh tarragon is typically stronger than dried one, so apparently fresh one is the ideal choice for your recipes. You can also double the amount of dried tarragon to your dish if you do not have available fresh one.

However, due to the use of the small amount of tarragon, you cannot keep fresh one for a long time for the next uses. So, it’s time for you to apply the following tips for storing fresh tarragon.

​How To Make Tarragon Recipes Properly?

​Tarragon is very popular in French cuisine; meanwhile, it is featured in some Tuscan recipes in Italy. It can create a distinct flavor when making sauces as well as going with meat, fish, seafood, and various vegetables such as potatoes, tomatoes, asparagus and bulb onions.

Furthermore, it is used for many broth-based soups, omelets, and soft cheese dishes. The following is the recipe “Dijon-Tarragon Cream Chicken” where tarragon plays as a flavor-boosting seasoning ingredient. Chicken breasts soaked in a subtle Dijon mustard tarragon sauce bring you a typical French flavor.

Considered as “the king of herbs,” tarragon is used to create delightful dishes with an appealing taste. If you are a newbie in cooking, learning all things about tarragon is necessary. I’m sure that you have answered the question “What does tarragon taste like?” now.

Remember the bittersweet taste of tarragon and its anise-flavor to use it appropriately in your recipes. So, I hope that the information provided above will give the useful suggestion to your future dishes with it.

Spread the love
Previous Post: « 5 Finger Food Ideas for a Holiday Party
Next Post: 8 Techniques To Improve Your Cooking Overnight For 2019 »

https://ginafordinfo.com/ is a participant in the Amazon Services LLC Associates Program, an affiliate advertising program designed to provide a means for sites to earn advertising fees by advertising and linking to Amazon.com.